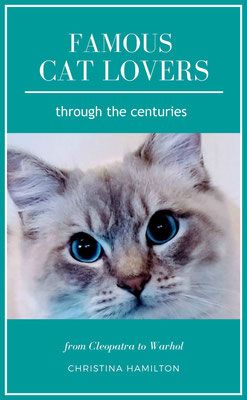 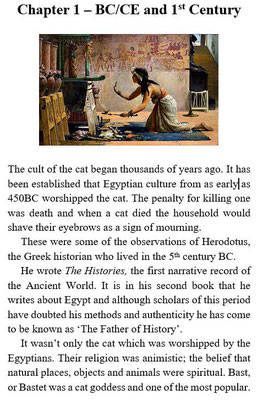 The story of the domesticated cat covers many centuries and ranges from adoration to hatred and back full circle to mostly love.

Recent speculation seems to confirm that domestic cats are descended from one species; a Middle Eastern wildcat that lived 12,000 years ago. As the fertile crescent of the Middle East flourished, farmers began to store their grain and the mouse population expanded rapidly. The wildcats came out of the woods to hunt and so the familiar tale of the cat and mouse began. The cat was welcomed as the perfect solution to pest control, and thus began its domestication and the enduring relationship between humans and cats.

Whilst I am sure the farmers were happy that the mice were under control, all cat lovers know that cats bring far more than just an instinct for hunting small rodents.

In the US in 2017/18 nearly 32 million households owned a cat and in the UK in 2019 the PDSA estimated 10.9 million households owned a cat. This book aims to bring you surprising, interesting, and astonishing stories of that relationship. Whether they are the humble moggy or the highest pedigree, cats have always inspired and endeared themselves to people. It’s not surprising that some of our most distinguished historical public figures in literature, art and politics fell in love with cats. This book ranges across the centuries and brings you the personal, private cat stories behind the public faces. I hope it will surprise and delight you as I reveal what happened behind closed doors between these famous owners and their cats.

The cult of the cat began thousands of years ago. It has been established that Egyptian culture from as early as 450BC worshipped the cat. The penalty for killing one was death and when a cat died the household would shave their eyebrows as a sign of mourning.

These were some of the observations of Herodotus, the Greek historian who lived in the 5th century BC.

He wrote The Histories, the first narrative record of the Ancient World. It is in his second book that he writes about Egypt and although scholars of this period have doubted his methods and authenticity he has come to be known as ‘The Father of History’.

It wasn’t only the cat which was worshipped by the Egyptians. Their religion was animistic; the belief that natural places, objects and animals were spiritual. Bast, or Bastet was a cat goddess and one of the most popular. The temple at Bubastis was dedicated to her and dead cats were brought to the temple to be mummified as an offering to her.

When Cleopatra arrived in Egypt from Macedonia, she adopted not only the language but its culture. It would therefore be entirely possible that she owned a cat. Some sources name her cat as Charmain, whilst others say it was called Tivali. It was not common to name a cat. They were usually called ‘mui’ or ‘muit’ perhaps relating to the noise they make.

The invention of cat cafes in Japan has given rise to many more around the world. The Japanese love cats, some even worship them, but lack of living space and long working hours prohibit many from owning them. This yearning for cat love has been satisfied with the cat café where you pay to spend time with the cat of your choice.

There were no such restrictions for Emperor Ichijo, the 66th Emperor of Japan, who ruled from 986-1011. The high status of cats in Japan is credited to this Emperor because when he was 13 years old, in 999AD, a litter of five white kittens were born. The Emperor’s favourite kitten, Myobu No Omotu was given a rank at court; Lady of the Fourth Court. A banquet was held in honour of the cat’s birth and special rice cakes were made. The Emperor was so enchanted by his favourite that he decreed she was to be treated like a Royal Princess. She even had her own lady in waiting.

In Islamic culture the cat has a special place in the hearts of its followers. This is due largely to the Prophet Mohammad and his favourite cat, Muezza. A particularly famous story relates how Mohammad rose from his bed as he heard the call to prayer and saw that Muezza was lying on the sleeve of his robe. He cut off the sleeve rather than disturb the cat. Such was Mohammad’s devotion to Muezza that he allowed her to rest in his lap during his sermons. He also drank from the cat’s water and washed himself with it. Legend also says that the ‘m’ marking on the forehead of a tabby cat was made by the Prophet resting his hand on its forehead.

The teachings of Islam state that Muslims must not trade or sell cats for money; they can drink the same water as cats as their saliva is harmless, unless impurities are visible in its mouth. They are free to live with cats so long as they feed and water them and treat them well and allow them to roam freely.